Drawing on a large academic literature in topics like sociology, behavioral economics, anthropology, and psychology, and especially the (generalized) theory of signalling, Robin Hanson has assembled a large toolbox for systemically understanding hypocrisy, i.e., the ways in which people’s actions systematically and selfishly deviate from their verbalized explanations. Although he would be the first to admit that many of these ideas have been discovered and rediscovered repeatedly over centuries (or millennia) with varying degrees of clarity, and although there is much I am not convinced by, I find the general framework deeply insightful, and his presentation to be more clear, analytical, and descriptive (rather than disruptively normative) than other accounts. Most of this I have gathered from his renowned blogging at Overcoming Bias, but I have always wished for a more concise (and high status!) form factor that I could point others to. At long last, Hanson and his co-author Kevin Simler have written a nice book that largely satisfies me: The Elephant in the Brain (Amazon). I highly recommend it.

The reason I title these sorts of blog posts “Comments on…” is so I can present some disorganized responses to a work without feeling like I need to build a coherent thesis or pass overall judgment. I do not summarize the book below, so this post will mostly be useful for people who have read it. (You might think of this as a one-sided book club discussion rather than a book review.) But since I will naturally tend to focus on the places where I disagree with the authors, let me emphasize: the basic ideas of this book strike me as profound and probably mostly true.… [continue reading]

This is a quick post to highlight an excellent new PDF reader on macOS called PDF Guru (iTunes store). It is a recently revamped version of PDF Reader X.

I’ve only used it for a week, but it’s the best PDF reader I’ve experienced for reading academic articles. It’s snappy and reminds me of Chrome when it first came out. Draggable tabs. Split view. Plays well with Zotero. Can easily add native PDF annotation and search through the existing ones. (And it saves annotations fast when you close the file.Competitors either do this slowly or, like Skim, use a non-native annotation format that can’t be read by other PDF readers.a  ) The UI for “find” displays a lot of info intuitively.Edit 2018-1-12: And you can search for any unicode character! Really useful for searching a document for math.b   Everything is just nicely designed. I haven’t yet run into a limitation on the free version, but it’s worth upgrading to Pro to support the developer (only $20). 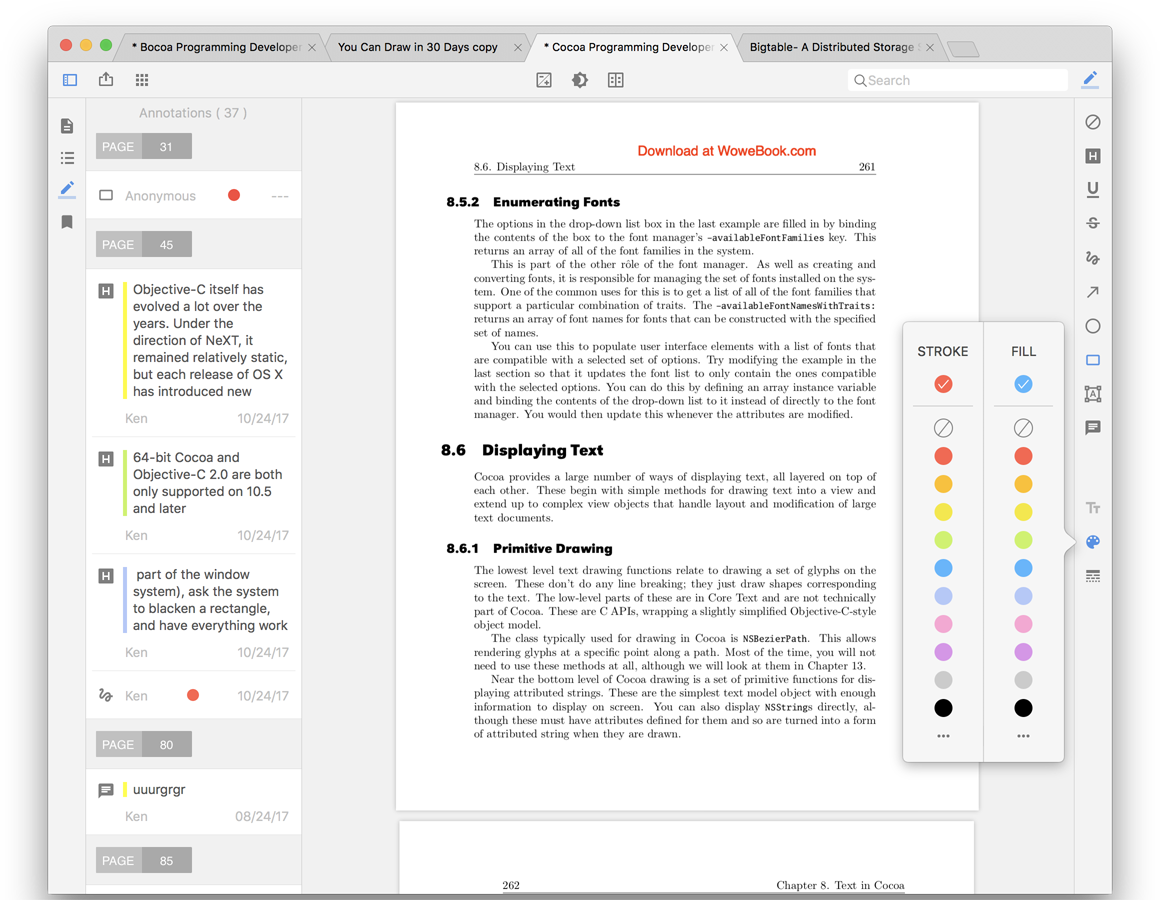 Beware that this is the first version following a big re-write of PDF Reader X, and it’s not completely stable. I’ve gotten it to crash a few times, but the developer has been very responsive to feedback and I’d wager on the stability improving soon. (Edit 2018-1-7: After upgrading to the new version, 3.0.20A, a couple weeks ago, I haven’t experienced any crashes. Looks stable.)

I’m advertising Guru because I think the current selection of PDF readers for academic reading is pretty bad.I have no connection to the developer.c   I strongly prefer Guru (instability and all) over these other PDF readers on maxOS that I have tried: FoxIt, Preview, Adobe Acrobat Reader, and Skim.… [continue reading]

I had been vaguely aware that there was an important connection between tensor network representations of quantum many-body states (e.g., matrix product states) and artificial neural nets, but it didn’t really click together until I saw Roger Melko’s nice talk on Friday about his recent paper with Torlai et al.:There is a title card about “resurgence” from Francesco Di Renzo’s talk at the beginning of the talk you can ignore. This is just a mistake in KITP’s video system.a

In particular, he sketched the essential equivalence between matrix product states (MPS) and restricted Boltzmann machinesThis is discussed in detail by Chen et al. See also good intuition and a helpful physicist-statistician dictionary from Lin and Tegmark.b   (RBM) before showing how he and collaborators could train an efficient RBM representations of the states of the transverse-field Ising and XXZ models with a small number of local measurements from the true state.

As you’ve heard me belabor ad nauseum, I think identifying and defining branches is the key outstanding task inhibiting progress in resolving the measurement problem. I had already been thinking of branches as a sort of “global” tensor in an MPS, i.e., there would be a single index (bond) that would label the branches and serve to efficiently encode a pure state with long-range entanglement due to the amplification that defines a physical measurement process. (More generally, you can imagine branching events with effects that haven’t propagated outside of some region, such as the light-cone or Lieb-Robinson bound, and you might even make a hand-wavy connection to entanglement renormalization.)… [continue reading]

[This is akin to a living review, which will hopefully improve from time to time. Last edited 2020-4-8.]

for some tensor decomposition

is an (approximately) stable orthonormal basis independent of initial state, and where

is the initial state of

is some characteristic time scale.a   which additionally feature some combination of amplification, irreversibility, redundant records, and/or outcomes with an intuitive macroscopic interpretation.

) and recover the classical equations of motion; Yaffe has a pleasingly general approach to that task [1], but I’ve previously sketched why that’s an incomplete explanation for classicality.)

I have the following desiderata for models, which tend to be in tension with computational tractability:

Regarding that last one: we would like to recover “classical behavior” in the sense of classical Hamiltonian flow, which (presumably) means continuous degrees of freedom.… [continue reading]

19 Comments
[Added 2022-March-13: Weingarten has a new paper, discussed by me here, that mostly supercedes the content of this post.]

We start by assuming that a precise wavefunction branch structure has been specified. The idea, basically, is to randomly draw a branch at late times according to the Born probability, then to evolve it backwards in time to the beginning of the universe and take that as your initial condition. The main motivating observation is that, if we assume that all branch splittings are defined by a projective decomposition of some subsystem (‘the system’) which is recorded faithfully elsewhere (‘the environment’), then the lone preferred branch — time-evolving by itself — is an eigenstate of each of the projectors defining the splits. In a sense, Weingarten lays claim to ordered consistency [arxiv:gr-qc/9607073] by assuming partial-trace decoherenceNote on terminology: What Finkelstein called “partial-trace decoherence” is really a specialized form of consistency (i.e.,… [continue reading]