I am briefly stirring from my blog-hibernationThis blog will resume at full force sometime in the future, but not just yet.a   to present a collection of frequently asked questions about experiments seeking to investigate quantum Darwinism (QD). Most of the questions were asked by (or evolved from questions asked by) Phillip Ball while we corresponded regarding his recent article “Quantum Darwinism, an Idea to Explain Objective Reality, Passes First Tests” for Quanta magazine, which I recommend you check out.

Who is trying see quantum Darwinism in experiments?

What are the experiments doing to put QD the test?

These teams construct a kind of “synthetic environment” from just a few qubits, and then interrogate them to discover the information that they contain about the quantum system to which they are coupled.

What do you think of experimental tests of QD in general?

Considered as a strictly mathematical phenomenon, QD is the dynamical creation of certain kinds of correlations between certain systems and their environments under certain conditions. These experiments directly confirm that, if such conditions are created, the expected correlations are obtained.

The experiments are, unfortunately, not likely to offer many insight or opportunities for surprise; the result can be predicted with very high confidence long in advance. QD is roughly about demonstrating the internal (theoretical) compatibility of unitary quantum dynamics with the appearance of classicality (and, in particular, wavefunction collapse). Since classicality/collapse are prerequisites for performing laboratory measurements in the first place, such measurements can’t really tell you anything new.

The best argument for performing these experiments probably is that they are good exercise; directly illustrating QD can require some very difficult measurements that will push the boundaries of existing laboratory techniques. A counterargument is that, conditional on not attempting to make measurements with uncertain outcomes (say, because searching for new fundamental physics is just so hard/expensive), the proper exercise for pushing the boundaries of experimental ability is best devised by the experimentalists themselves, and that illustrating intrinsically theoretical work is mostly theatre. I see merit in both arguments.

So these experiments don’t teach us anything new about QD, nor do they eliminate any possible ways that QD might be wrong. QD is most like an internal self-consistency check on quantum theory, vaguely like how a proof of Yang–Mills existence and mass gap would give some mathematical justification for why the currently unrigorous QFT techniques are so accurate and useful for predicting the results of experiments.

Is it surprising that, even with just an “environment” of a few qubits, one can apparently see some of these features emerge?

Theoretically, no. It’s straightforward to compute just how many qubits in the environment you need to support any desired information structure in the environment. Rather, what is maybe surprising is that feasible experiments were devised and executed that demonstrated these features in actual physical systems rather than just in our notebooks.

To which systems does QD apply?

A system doesn’t have to be under study in any formal sense. An important part of QD is that it putatively explains (or helps to explain) all of classicality, including everyday macroscopic objects that aren’t in a laboratory, or that existed before there were any humans. So let’s just call them “quasiclassical” system, i.e., a system that seems to have variables (position and momentum) with uncertainty that remains very small compared to the magnitude of those variables and which behave classically to a good approximation. (In contrast, a stray electron is not quasiclassical because it moves nonclassically, like tunneling, and has relatively large uncertainty in position, momentum, or both.) 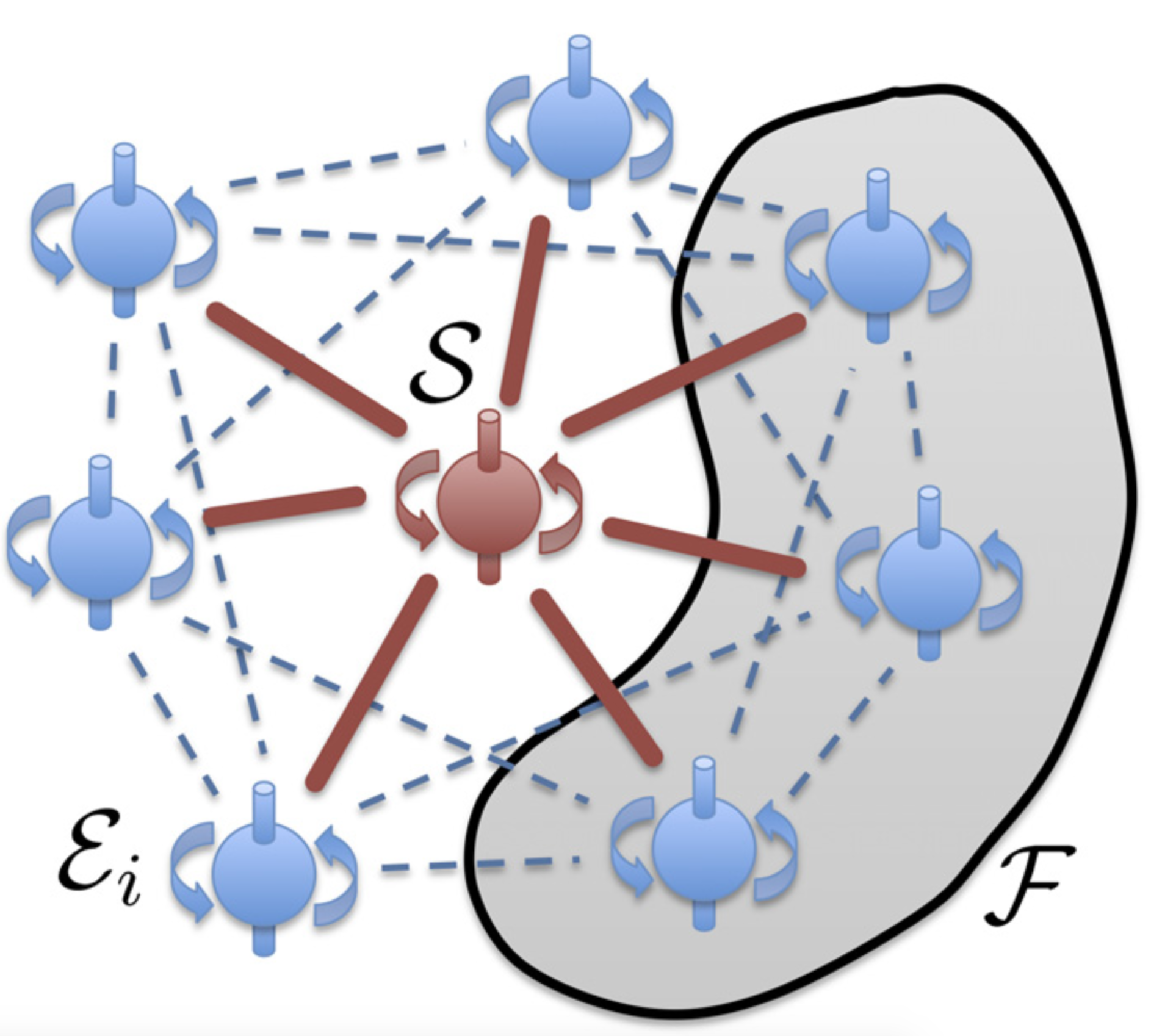 A common toy setting for QD is a single system spin

. An important prerequisite for redundant correlations forming in the environment is, roughly, that the interaction between

is stronger than between the different

. Although the preferred system

can be an actual physical spin as shown above, naturally occurring QD is often for collective variables (e.g., mean fields). This image is Fig. 1 in arXiv:1205.3197, our paper which contains more details.

It’s been said that QD predicts that information about quasiclassical quantum system is encoded redundantly in its environment, and that this information “saturates” quite quickly as more of the environment is accessible. Is that right?

Is that saturation a unique and definitive signature of QD?

Wojciech Zurek prefers to characterize QD with mutual information in particular. I am inclined to think about QD as a certain entanglement structure in a many-body setting that can be identified with multiple metrics, mutual information being one example. (Indeed, I take a minority viewpoint that QD is really about giving a mathematical definition of wavefunction branches, a polemical and still incomplete project mentioned below.) The work of Korbicz and collaborators (arXiv:1401.1712, 1312.6588, 1607.02478) is arguably somewhere in the middle, and they emphasize this by speaking of “broadcast structure”.

The other key aspect of QD is that the environment acts as a filter that selects the robust pointer states – ultimately, the classical states – from among the various quantum states available. What is the signature of einselection in these experiments?

The einselected basis will be whichever basis is the basis in which the system is correlated with small fractions of the environment. This basis is encoded in the density matrix of the system, which is exhaustively reconstructed in Fig. 3 (a,b) of arXiv:1808.07388 and Fig. 4 of arXiv:1803.01913. The existence of such a basis can be inferred from the plots of mutual information, computed from these density matrices and displayed in Fig. 3 (c,d) of arXiv:1808.07388 and Fig. 5 of arXiv:1803.01913.

Why is QD required to generate classical phenomena from quantum ones?

Unfortunately, this is closely tied to both the interpretation of quantum mechanics and the previously mentioned disagreement about how the QD phenomenon is best characterized. More broadly, researchers disagree on what exactly the problem is and what a solution would look like. My personal view is that QD is a way of identifying a preferred decomposition of the wavefunction into branches, on which I have pontificated in previous blog posts – 1, 2, 3, 4 – and the introductions to these papers, arXiv: 1312.0331, 1608.05377 (especially the last one). However, I emphasize that only a handful of people agree with me on that.

[I thank Philip Ball for discussion.]