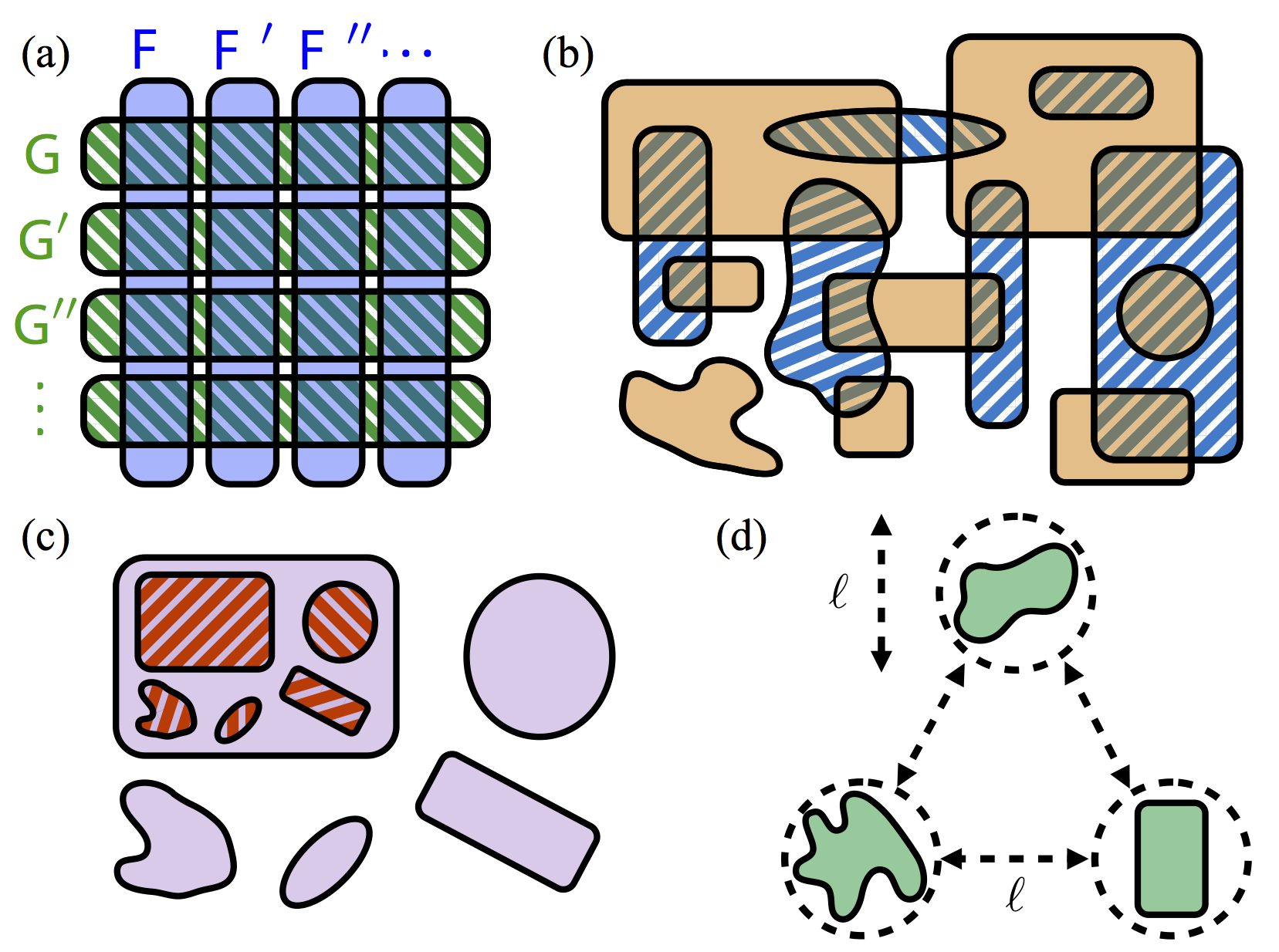 ). (a) The spatial record structure of the Shor-code family of states, which can exhibit arbitrary redundancy (in this case four-fold) for two incompatible observables. (b) The solid orange observable pair-covers the hashed blue observable because the top two orange records overlap all blue records. However, if one of the top two orange records is dropped, then neither observable pair-covers the other, and hence both are compatible, despite many overlaps of individual records. (c) Any spatially bounded set of records can be contained inside a single record of a sufficiently dilated but otherwise identical set of records for an incompatible observable; such a state is given in Eq. (9). (d) Any observable with records satisfying the hypothesis of the Corollary for some length

cannot pair-cover, or be pair-covered by, any other such observable.

It is my highly unusual opinion that identifying a definition for the branches in the wavefunction is the most conceptually important problem is physics. The reasoning is straightforward: (1) quantum mechanics is the most profound thing we know about the universe, (2) the measurement process is at the heart of the weirdness, and (3) the critical roadblock to analysis is a definition of what we’re talking about. (Each step is of course highly disputed, and I won’t defend the reasoning here.) In my biased opinion, the paper represents the closest yet anyone has gotten to giving a mathematically precise definition.

On the last page of the paper, I speculate on the possibility that branch finding may have practical (!) applications for speeding up numerical simulations of quantum many-body systems using matrix-product states (MPS), or tensor networks in general. The rough idea is this: Generic quantum systems are exponentially hard to simulate, but classical systems (even stochastic ones) are not. A definition of branches would identify which degrees of freedom of a quantum system could be accurately simulated classically, and when. Although classical computational transitions are understood in many certain special cases, our macroscopic observations of the real world strongly suggest that all systems we study admit classical descriptions on large enough scales.Note that whether certain degrees of freedom admit a classical effective description is a computational question. The existence of such a description is incompatible with them exhibiting quantum supremacy, but it is compatible with them encoding circumstantial evidence (at the macro scale) for quantum mechanics (at the micro scale).b   There is reason to think a general (abstract) description of the quantum-classical transition is possible, and would allow us to go beyond special cases.

In the rest this blog post I’m going to construct a simple MPS state featuring branches with records that are arbitrarily redundant. The state’s key features will be that it is translationally invariant and has finite correlation length. Translational invariance makes the state much easier to study and compare with the literature, and is a property shared with the simple inflationary model I’m studying with Elliot Nelson. Finite correlation length eliminates the trivial solution of a generalized GHZ state, guarantees that there are an infinite number of branches (if there are any at all), and is in some sense more natural.

An MPS with branches

Our strategy will be to build the state up from a classical probability distribution that already has the key features. Let

, be a classical state of a finite 1D lattice of

), and consider the canonical ensemble starting with a uniform distribution and adding an energetic penalty of

. It’s not hard to check that the classical expectation value obeys

If we define our correlation length

The idea is to define our quantum state as a superposition of configurations of a spin chain weighted by this distribution:

will be highly correlated. The coarse-grained variables that are being recorded are something like “whether this local region is mostly

”, but we don’t necessarily want each qubit to have a perfect record of this information. Rather, we choose

for some fixed (typically small) angle

one can’t reliably infer the classical variable from a measurement on a single spin, but one can make an arbitrarily reliable inference by measuring lots of them:

. If we define our “recording length”

Thus our final (unnormalized) state is

. The state inherits from the classical probability distribution the properties of finite correlation length and translational invariance. Any contiguous set of

spins is very likely to all be in the same state, and by measuring a subset of

spins one can distinguish between the cases

with high reliability. Therefore in the limit

it makes sense to define the redundancy

; this is the approximate number of disjoint records that are available about each branch, where there is a (binary) branch density of

Now lets turn this into a matrix-product state.This will not be a general algorithm for building MPSs since it exploits the special form of the state (6) we’re trying to build, which allows us to identify the

range over the local Hilbert spaces of the qubits and the

‘s horizontally). The trick is to pretend that our classical probability distribution was achieved by starting with a quantum state of appropriately weighted bras,

and contracting (i.e., multiplying from the right to inner-product over the fictional bras) with a specially designed state that picks out the correct conditional states of the original Hilbert space:

then takes the form of (7) and is equal to

so long as we choose

[I think Martin Ganahl and Guifre Vidal for discussion.]