Bousso has a recent paper bounding the maximum information that can be sent by a signal from first principles in QFT:

Universal Limit on Communication
Raphael Bousso
I derive a universal upper bound on the capacity of any communication channel between two distant systems. The Holevo quantity, and hence the mutual information, is at most of order

the average energy of the signal, and

is the amount of time for which detectors operate. The bound does not depend on the size or mass of the emitting and receiving systems, nor on the nature of the signal. No restrictions on preparing and processing the signal are imposed. As an example, I consider the encoding of information in the transverse or angular position of a signal emitted and received by systems of arbitrarily large cross-section. In the limit of a large message space, quantum effects become important even if individual signals are classical, and the bound is upheld. 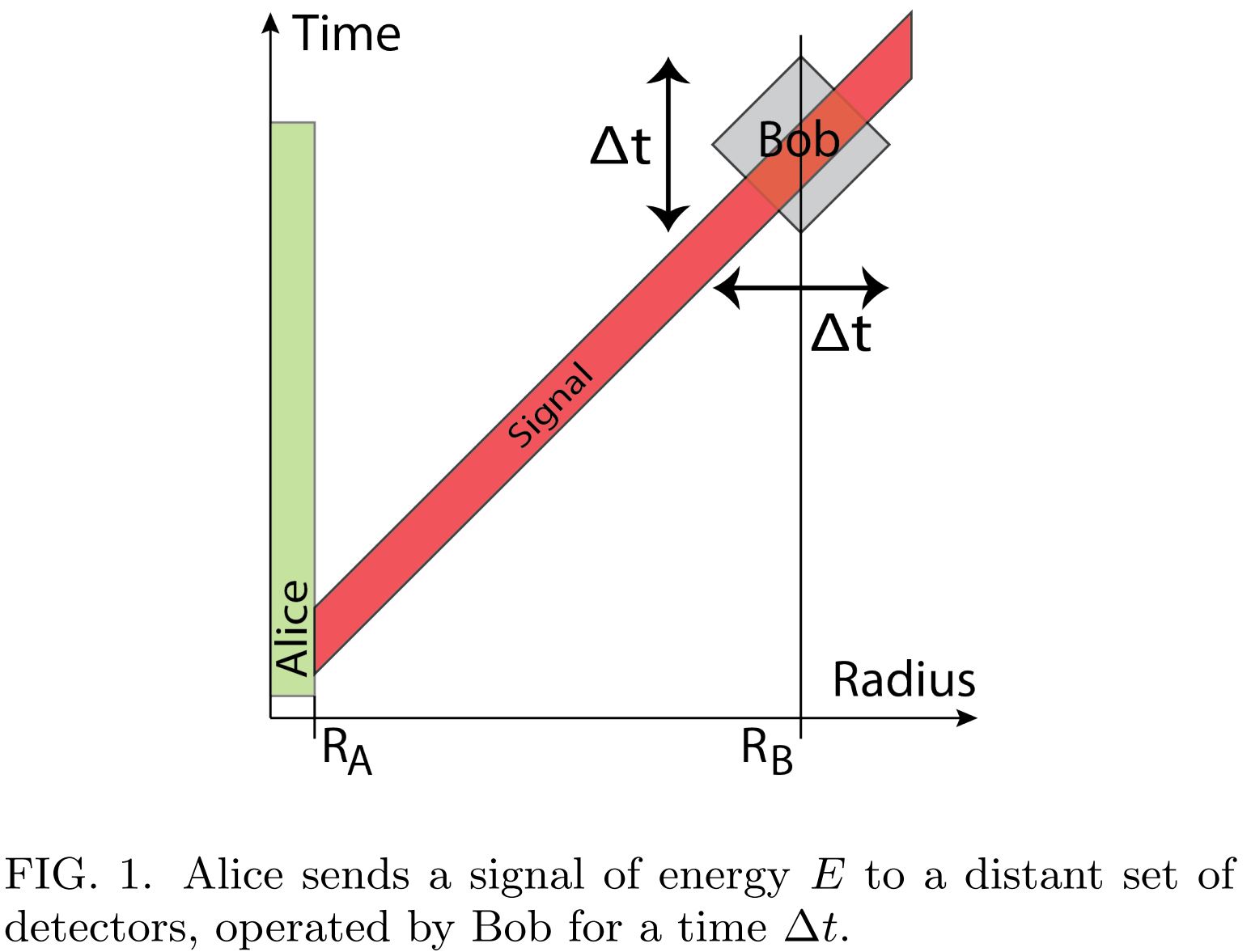 This all stems from vacuum entanglement, an oft-neglected aspect of QFT that Bousso doesn’t emphasize in the paper as the key ingredient.I thank Scott Aaronson for first pointing this out.a   The gradient term in the Hamiltonian for QFTs means that the value of the field at two nearby locations is always entangled. In particular, the value of

) are sometimes considered independent degrees of freedom but, for a state with bounded energy, they can’t actually take arbitrarily different values as

becomes small, or else the gradient contribution to the Hamiltonian violates the energy bound. Technically this entanglement exists over arbitrary distances, but it is exponentially suppressed on scales larger than the Compton wavelength of the field. For massless fields (infinite Compton wavelength), the entanglement is long range, but the amount you can actually measure is suppressed exponentially on a scale given by the length of your measuring apparatus.

In this case Bob’s measuring apparatus has effective size

, which of courseYou can tell this is a HEP theorist playing with some recently-learned quantum information because he sets

. (It may actually be of size

or, like a radio antenna, it may effectively be this size by integrating the measurement over a time long enough for a wave of that length to pass by.) Such a device is necessarily noisy when trying to measure modes whose wavelength is longer than this scale. So Alice can only communicate to Bob with high fidelity through excitations of energy at least

in order to send a single bit of information, and intuitively we could double the information by sending two bits sequentially (taking total time

). So it’s natural that the maximum possible information that can be sent, as upper bounded by the Holevo quantity, is

Folks have long noticed limits of this sort in special casesYuan Wan points to J. B. Pendry, Quantum limits to the flow of information and entropy (1983), which has good cites to prior work.c  , and so this general derivation is useful.