Question: What sort of physics — if any — should be funded on the margin right now by someone trying to maximize positive impact for society, perhaps over the very long term?

First, it’s useful to separate the field into fundamental physics and non-fundamental physics, where the former is concerned with discovering new fundamental laws of the universe (particle physics, high-energy theory, cosmology, some astrophysics) and the latter applies accepted laws to understand physical systems (condensed matter, material physics, quantum information and control, plasma physics, nuclear physics, fluid dynamics, biophysics, atomic/molecular/optical physics, geophysics).Some folks like David Nelson dispute the importance/usefulness of this distinction: PDF. In my opinion, he is correct, but only about the most boring part of fundamental physics (which has unfortunately dominated most of those subfields). More speculative research, such as the validity (!!!) of quantum mechanics, is undeniably of a different character from the investigation of low-energy field theories. But that point isn’t important for the present topic.a

That distinction made, let’s dive in.

In my mostly uninformed opinion, only fusion power (#3) could be among the most valuable causes in the world, plausibly scoring very highly on importance, tractability, and neglectedness — with the notable caveat that the measurable progress would necessitate an investment of billions rather than millions of dollars. I can’t defend that claim in detail, but let me say the following. For all the discussion of global warming, energy prices, population crunches, etc., etc., the primary argument you’ve heard against fusion power is the simple charge that it’s unfeasibly costly (or of highly uncertain cost). At least among non-experts, this is generally justified by pointing out that fusion power advancements have had a history of being grossly more expensive than promised. (“30 years away for the past 40 years”.) However, as far as I can tell, this is just a popular misconception. From a 2014 New Yorker article:

In the United States, political will has long been governed by a form of Washingtonian special relativity: depending on whether you are inside or outside the fusion community, the view differs dramatically. Typically, outsiders cannot comprehend how the massive expenditures never manage to yield energy. Typically, insiders cannot comprehend how little is being invested in a project that presents such immense technical obstacles and also such potential. A graph commonly passed around among the insiders—an enduring scrap of twentieth-century budgetary ephemera—depicts the 1976 federal plan to build a working thermonuclear reactor. The graph tracks various scenarios for attaining fusion energy. The “maximum” effort, the most expensive up front, with initial spending as high as nine billion dollars a year, was projected to yield a reactor by 1990. The “moderate” effort, with spending never exceeding four billion dollars in a year, would take fifteen more years. The fusion community might be easy to criticize for its many unmet milestones, but for decades the United States has never come close to even the moderate effort. In 1977, when the American fusion budget was at its peak, government investment in the research, adjusted for inflation, was seven hundred million dollars; by 1991, this had fallen by more than half. It is now half a billion, not appreciably more than the Korean budget. 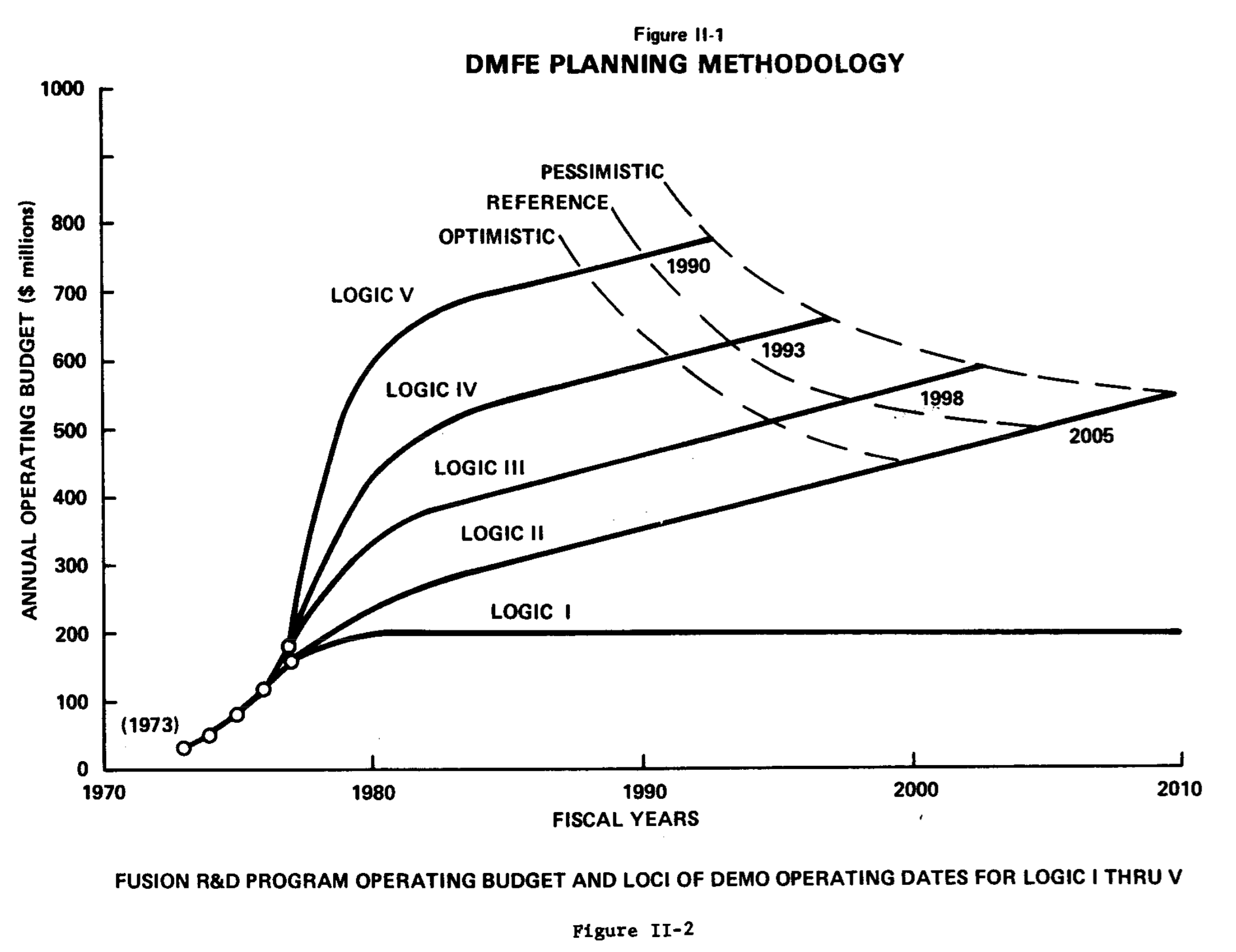 was produced by Energy Research and Development Administration (ERDA), which was later subsumed into the Department of Energy and presumably represented the expert wisdom at the time. (I have not been able to find contrary evidence that most experts were in fact more optimistic.) In other words, the authoritative government body on energy research made it very clear 40 years ago what it would cost to develop fusion power. Fusion power never got the required funding so it never materialized — as predicted.

No doubt this grossly oversimplifies the story. Even if it were to capture the modern majority expert opinion, I’m sure there exist other experts who know much more than me who could argue persuasively against the feasibility of fusion. But it’s worth noting that at the level of the public discourse influencing the election of politicians the main argument against investing in fusion power may be completely, utterly wrong. (Suggestions for further reading that would address this claim are greatly appreciated.)

The most plausible places where fundamental physics would have practical social impact are “unknown unknowns”, and therefore very hard to target funding toward. Those are hard to list, so let’s try our best at some known unknowns:

Empirically, the investigations of these avenues (e.g., the LHC) are capable of absorbing nearly unlimited funding. Furthermore, I find it very unlikely that any of these will be realized.

In the past, pure curiosity-driven research into fundamental physics lead to technological advances with profound social benefit. Although this is still possible, it’s important to recognize that this is much less likely to be true today. That is, fundamental physics is much less likely to yield concrete, practically useful information than it has historically. In fact, the value of each new insight into fundamental physics has been declining since at least the ’50s, even as the pace at which we acquire these insights has slowed dramatically. The reason a better understanding of fundamental physics probably won’t produce anything practical anymore is pretty simple: “The Laws Underlying The Physics of Everyday Life Are Completely Understood” (seriously).Sean Carroll now has a more formal paper about this: [arXiv: 2101.07884].d   We must go to more and more extreme regimes, like the LHC, in order to find situations where there is substantial uncertainty about the basic laws. It’s still possible that we will go to these conceptual and physical extremes and bring back something useful, but this isn’t nearly as likely as it was in the past when the exact laws describing fire and electricity were unknown.The most notable counterexample is probably nuclear physics. Although historically there were hints, in the form of radioactivity, that something interesting was going on in the nucleus, the effects on every day life were basically negligible; the nucleus could be treated as a black box. However, nuclear weapons, nuclear power, and the many applications for nuclear isotopes are clear products of a detailed knowledge of the extreme regimes inside the nucleus that could not have been predicted from everyday observations.e

If we accept that physics discoveries are unlikely to have either a large social impact or an easily identifiable and fundable precursor, with the possible exception of the well-known special case of fusion power, the natural question is: What else could academic physics be good for? One answer: using its high-status position to change how academics is done. The arXiv was a product of physics, and it clearly is a general force for open science in many other fields (especially now: math, computer science, and biology). Historically, many general techniques of science have diffused from physics to other fields. Physicists have had a positive impact invading other fields (e.g., biophysics, genomics, machine learning), especially recently, and it might be possible to accelerate this through targeted funding.

On this point, Steve Hsu shared with me some concurring thoughts (at this point purely speculative):

I think there’s a big upside to putting resources aside to help physicists convert to other fields such as genomics or AI research. Two reasons: 1. there is a big cognitive surplus in physics, 2. because there are intuitions and also knowledge we have that could be useful but are not understood in other fields.

Some 3-5 year fellowships (~$80k salary + some travel and compute = $100k) to help individuals make the transition would have high ROI. Let them attach (for free) to whatever target institution they like.

If these became institutionalized, it would allow bright people to shoot for the big problems while they are young, with the knowledge that they can switch fields later (in a smooth way) if necessary.

It’s hard to identify specific areas of physics work that should be specifically targeted, but I can think about that as well.

To brainstorm further, here are some changes to academics that could be (and is being) pioneered by physicists, and might plausibly absorb high-impact funding:

For now, I’ll leave a detailed discussion of those possibilities to someone else.

[I thank Nick Beckstead, Steve Hsu, Luke Muehlhauser, Rebecca Raible, Helen Toner, Jacob Trefethen, and Claire Zabel for discussion on this. And I thank Anthony Aguirre for the brilliant suggestion to change “PhysicsWell” to the much more pleasing “PhysWell”.]