How fast do macroscopic wavefunctions branch?

Over at PhysicsOverflow, Daniel Ranard asked a question that’s near and dear to my heart:

How deterministic are large open quantum systems (e.g. with humans)?

Consider some large system modeled as an open quantum system — say, a person in a room, where the walls of the room interact in a boring way with some environment. Begin with a pure initial state describing some comprehensible configuration. (Maybe the person is sitting down.) Generically, the system will be in a highly mixed state after some time. Both normal human experience and the study of decoherence suggest that this state will be a mixture of orthogonal pure states that describe classical-like configurations. Call these configurations branches.

How much does a pure state of the system branch over human time scales? There will soon be many (many) orthogonal branches with distinct microscopic details. But to what extent will probabilities be spread over macroscopically (and noticeably) different branches?

I answered the question over there as best I could. Below, I’ll reproduce my answer and indulge in slightly more detail and speculation.

This question is central to my research interests, in the sense that completing that research would necessarily let me give a precise, unambiguous answer. So I can only give an imprecise, hand-wavy one. I’ll write down the punchline, then work backwards.

The instantaneous rate of branching, as measured in entropy/time (e.g., bits/s), is given by the sum of all positive Lyapunov exponents for all non-thermalized degrees of freedom.

Most of the vagueness in this claim comes from defining/identifying degree of freedom that have thermalized, and dealing with cases of partial/incomplete thermalization; these problems exists classically.

The original question postulates that the macroscopic system starts in a quantum state corresponding to some comprehensible classical configuration, i.e., the system is initially in a quantum state whose Wigner function is localized around some classical point in phase space. The Lyapunov exponents (units: inverse time) are a set of local quantities, each associated with a particular orthogonal direction in phase space. They give the rate at which local trajectories diverge, and they (and their associated directions) vary from point to point in phase space.

Lyapunov exponents are defined by the linearized dynamics around a point, and therefore they are constant on scales smaller than the third derivative of the potential. (Perfectly linear dynamics are governed by a quadradic Hamiltonian and hence a vanishing third derivative.) So if the Wigner function for the relevant degree of freedom is confined to a region smaller than this scale, it has a single well-defined set of Lyapunov exponents.The system can then be well approximated as evolving quasi-classically over timescales shorter than the Lyapunov constant, in agreement with Ehrenfest’s theorem.a

On the other hand, the Wigner function for degrees of freedom that are completely thermalized is confined only by the submanifold associated with values of conserved quantities like the energy; within this submanifold, the Wigner function is spread over scales larger than the linearization neighborhood and hence is not quasi classical. Degrees of freedom that have fully thermalized do not have branch structure because they are already maximally entangled with the external environment.

As mentioned above, I don’t know how to think about degree of freedom which are neither fully thermalized nor confined within the linear neighborhoods.

We want to associate (a) the rate at which nearby classical trajectories diverge with (b) the production of quantum entanglement entropy. The close relationship between these two has been shown in a bunch of toy models. For instance, see the many nice cites in the introduction of

especially this paper by my former advisor

The very crude picture is this: an initially pure quantum state with Wigner function localized around a classical point in phase space will spread to much larger phase-space scales at a rate given the Lyapunov exponent. The couplings between systems and environments are smooth functions of the phase space coordinates (i.e., environments monitor/measure some combination of the system’s x’s and p’s, but not arbitrary superpositions thereof), and the decoherence rate between two values of a coordinate is an increasing function of the difference. Once the Wigner function is spread over a sufficient distance in phase space, it will start to decohere into an incoherent mixture of branches, each of which are localized in phase spaceThis is especially transparent when looking at the class of sympectically invariant quantum Brownian motion models that I’ve recently become enamored with, since everything (…Markovian…) looks like QBM if you zoom in far enough.b  . See, for instance, Fig. 1 in Zurek & Paz: 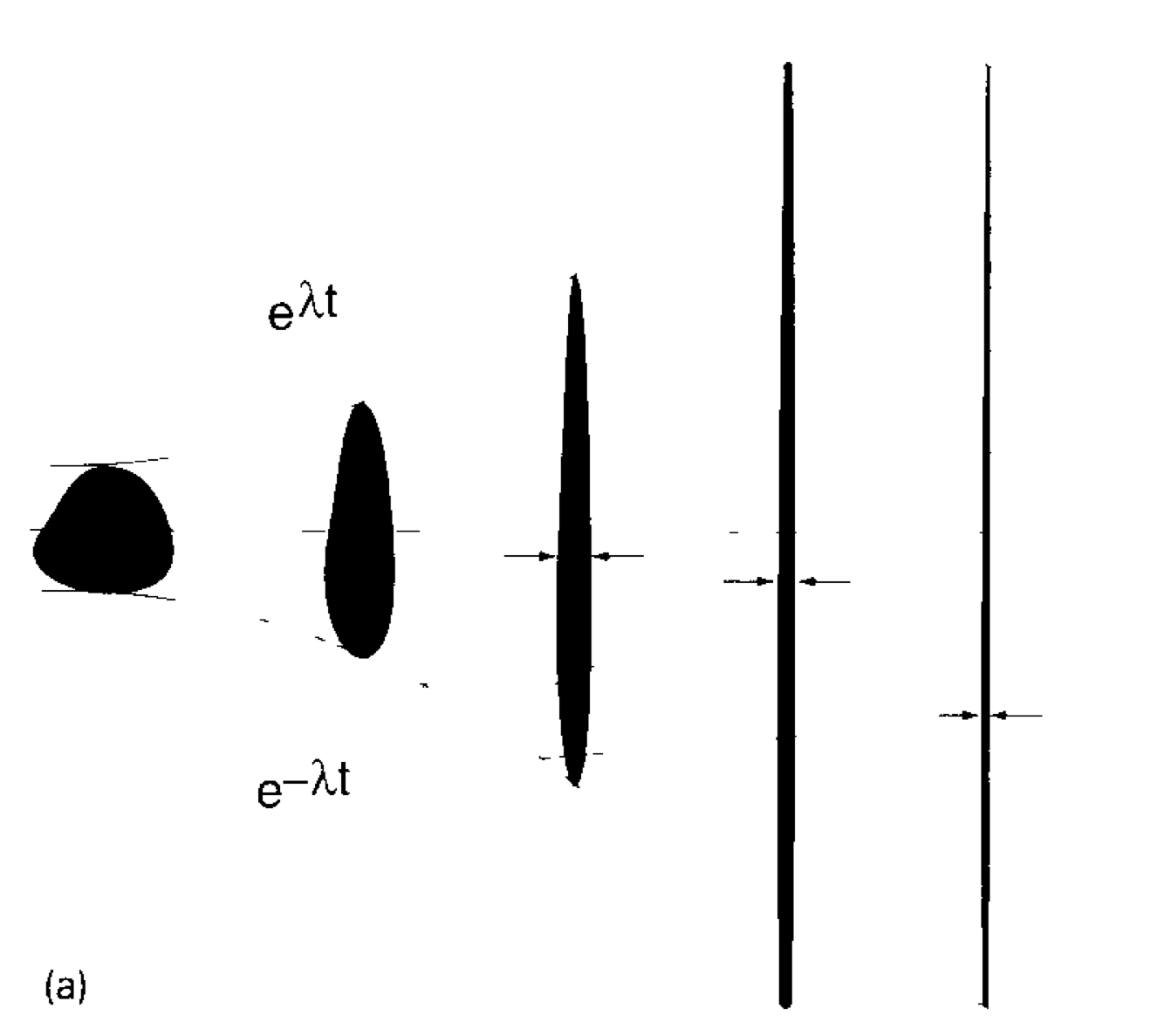 Hence, the rate of trajectory divergence gives the rate of branching.Daniel also says “If the initial state describes a person in deep sleep, then after a few seconds there will be no high-probability branches in which the person is awake. But if the person has an alarm clock triggered by nuclear decay, there may well be 50/50 branching in which the person is awake or asleep. (Note that you couldn’t get such branching with a regular alarm clock.)”. But note that, although it’s true you couldn’t get such branching with a highly-reliable deterministic alarm clock, you could dispense with the nuclear decay by measuring any macroscopic chaotic degree of freedom on a timescales longer than the associated Lyapunov time constant. In particular, measuring thermal fluctuations of just about anything should be sufficient.c

This answer would certainly not be immediately recognized as correct by the typical physicist, but I do think that if we restrict ourselves to the set of researcher that (1) agree that this is a well-posed question and (2) claim to know a non-trivial answer as least as precise as the one I’ve given above, then more than half of these physicists would agree that I’m correct up to the (considerable) inherent vagueness. But I’d guess this set probably has no more than a few dozen people in it.

(This part is more controversial.) The reason this questions was so hard to even formulate is two fold: