I just posted my newest paper: “Decoherence from classically undetectable sources: A standard quantum limit for diffusion” (arXiv:1504.03250). [Edit: Now published as PRA 92, 010101(R) (2015).] The basic idea is to prove a standard quantum limit (SQL) that shows that some particles can be detected through the anomalous decoherence they induce even though they cannot be detected with any classical experiment. Hopefully, this is more evidence that people should think of big spatial superpositions as sensitive detectors, not just neat curiosities.

In the pursuit of speculative new particles, forces, and dimensions with vanishingly small influence on normal matter, understanding the ultimate physical limits of experimental sensitivity is essential. Here, I show that quantum decoherence offers a window into otherwise inaccessible realms. There is a standard quantum limit for diffusion that restricts some entanglement-generating phenomena, like soft collisions with new particle species, from having appreciable classical influence on normal matter. Such phenomena are classically undetectable but can be revealed by the anomalous decoherence they induce on non-classical superpositions with long-range coherence in phase space. This gives strong, novel motivation for the construction of matter interferometers and other experimental sources of large superpositions, which recently have seen rapid progress. Decoherence is always at least second order in the coupling strength, so such searches are best suited for soft, but not weak, interactions. 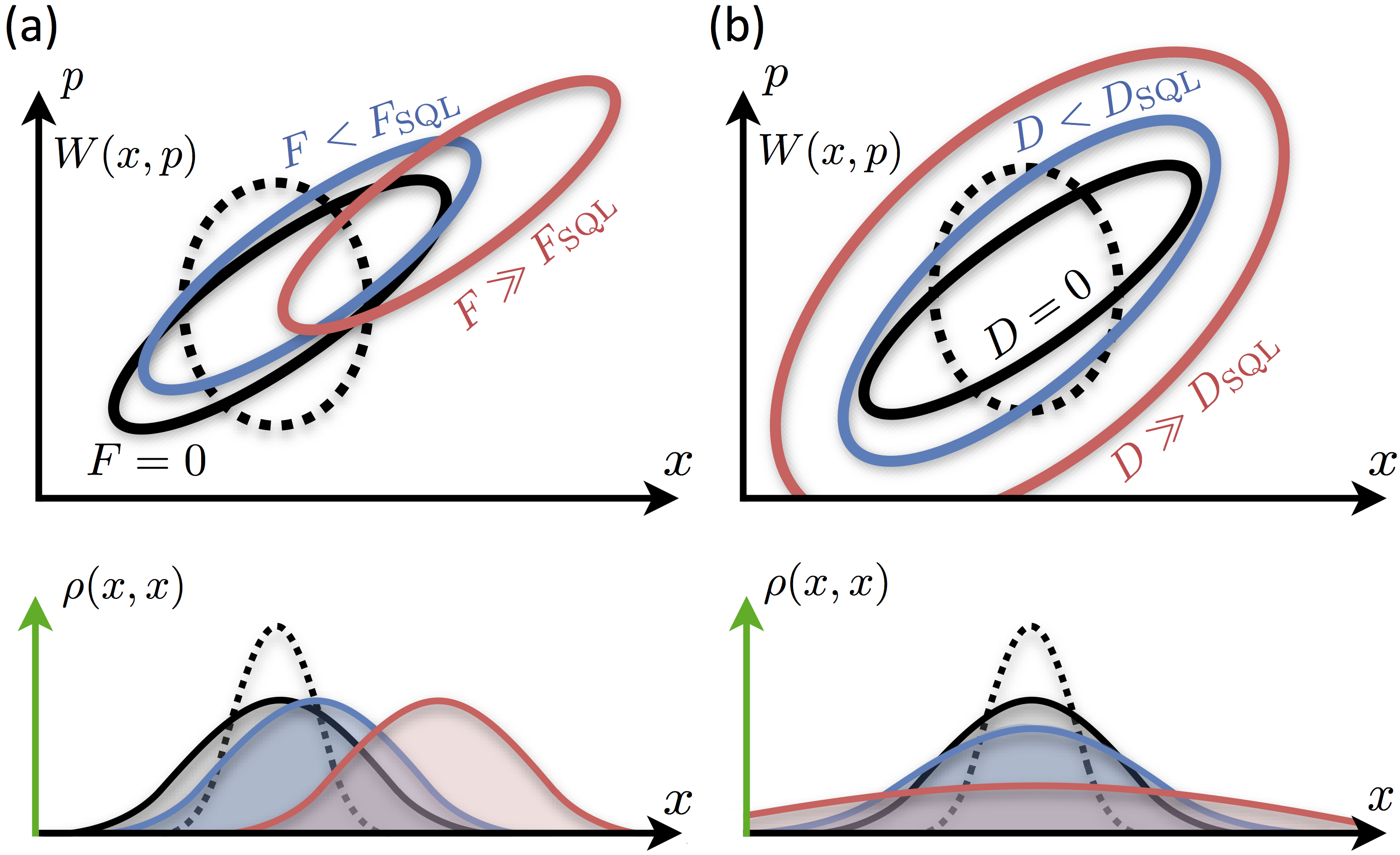 Standard quantum limit for forces and momentum diffusion. A test mass is initially placed in a minimal uncertainty wavepacket with a Wigner distribution

-contour of a Gaussian distribution (dashed black line). After a time

, the state will spread in position due to wavefunction dispersion even in the absence of a force or diffusion (solid black). The probability distribution of a subsequent position measurement (bottom) is obtained by integrating the Wigner distribution over momentum. (a) If a uniform force

displaces the wavepacket, it will not be reliably distinguishable from the zero-force scenario when

(blue), in contrast to the case

(red). (b) The standard quantum limit for momentum diffusion,

, provides a similar threshold for the detection of an environment that weakly smears the quantum state in phase space.

(Figure 3 already made an appearance on my popular post about quantum indeterminism as an anomaly.)

One of the hard parts about writing a paper by yourself is that it’s difficult to get good feedback on it. So comments are very much welcome, by email or below.