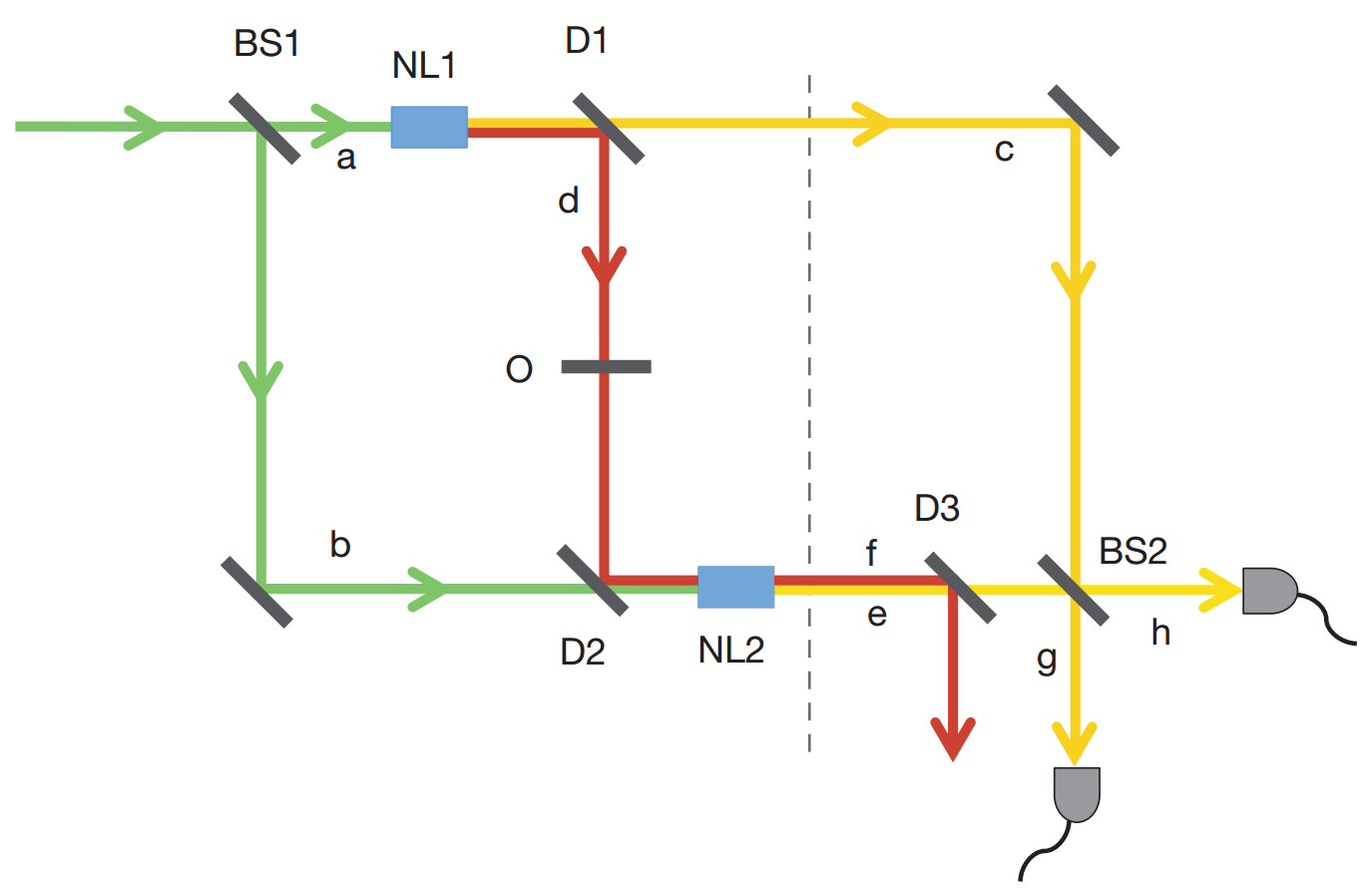 The first two paragraphs of the letter contain all the meat, encrypted and condensed into an opaque nugget of the kind that Nature loves; it stands as a good example of the lamentable way many quantum experimental articles are written. Anyways, the rest of the letter is a straightforward application of the secret sauce.“But Jess”, you object, “shouldn’t Lemos et al. just concentrate on the part they are adding — the imaging application — and include only a cryptic and confusing summary of the prior work on which they build?” No way, Jose. Their imaging applications are only remotely interesting because of the quantum aspects that are contained in the original experiment. (No one would have cared about the last 80% of the letter if it weren’t spookily using undetected photons crucially dependent on quantum effects.) It is absolutely critical that the reader understand exactly what’s going on in the beginning for them to appreciate the claimed importance of this application, and this is extremely hard to do if it requires pulling up a 23 year old paper and trying to match up different terminology and notation, not to mention the fact that the extensive experimental details in that paper really aren’t relevant to notibility. Of course, if the editor’s goal is just to sell magazines by stamping an experiment as “QUANTUM WEIRDNESS — HOW COOL IS THAT?!?”, then this is a great way to structure the letter…c   So let’s first layout exactly what happens in the described experiment in exhaustive detail, and then discuss.

As usual, entangled photons are produced using non-linear crystals, NL1 and NL2, that induce spontaneous parametric down-conversion. NL1 and NL2 are pumped by a strong laser, and each incident “pump” photon has a small chance of being converted into a pair of photons at two different lower frequencies known as “idler” and “signal”. Lemos et al. use a first-quantized notation, but I find it preferable to initially use a second quantized picture, because formally a component of the relevant wavefunction will contain multi-photon mode excitations. This component corresponds to two coincident SPDC events, which is so rare as to be completely negligible, but I think it improves conceptual clarity to work in a second-quantized picture at the beginning and then later simplify to the first-quantized picture when you have a handle on everything.

The important modes are

as distinct modes isn’t necessary, as we can just think about the last beam splitter as coupling modes

through a unitary interaction.

The initial state produced by BS1 is

denotes some macroscopic state of the laser. The first important transformation is

are slightly modified macroscopic states with one and two fewer photons, respectively, and where

is some small number characterizing the down-conversion rate. Likewise for NL2, we haveI have chosen the order for

to make the equations cleaner.d

The object O to be imaged has some transmissivity

and gives some phase shift

denotes a photon either scattered or absorbed by O. The crucial property of this experimental set up is that the mirror D2 is precisely aligned to deflect from mode

The final operation is provided by BS2:

Now, using a non-alphabetical order for the modes to make the structure clearer, the overall evolution is

to very high accuracy when the number of photons in the pump laser state is macroscopically large (which it is). We will ignore the first component (proportional to

) of our evolved state because it corresponds to the outcome where zero down-conversion photons are produced by the nonlinear crystals, and we will ignore the trailing components (proportional to

) because they correspond to cases of multiple down-conversion events at the same time, which is negligibly rare. The component of interest is proportional to

, which we peel off, and can be re-written as

We can immediately see how the transmission coefficient

determined by the object

influence the observed outcomes of the experiment. In particular, this experiment is capable of discerning whether the idler photon

has been either absorbed (

) without actually detecting the idler photon.

The first step in making the comparison between this experiment and my prototypical example of dark matter decoherence detection is to first identify the preferred bases in each. For dark matter, the preferred basis is the phase-space localized wavepackets of the probe (made of normal matter); the interferometer is constructed to measure decoherence and phase-shifts of a superposition of the probe. In the Lemos et al. experiment, the main interference is taking place between two components of the wavefunction: the component where a signal photon in mode

is produced by NL1, and the component where the signal photon in mode

is produced by NL2. (If we imagine modifying this experiment such that the idler photon was never produced, then it reduces to a simple Mach-Zhender interferometer.) The analog to the “dark matter”, in this case, is the joint system comprising the idler photon

; it’s that joint system that becomes entangled with the state of the signal photon, effectively measuring the latter to be either in mode

without actually disturbing it. A slightly different way to frame it is to say that

is the dark matter and that it serves to “turn on”, through it’s effect on the idler photon, the interaction that ultimately decoheres (or adds a phase to) the signal photon.

This sort of experiment is only useful if we are not able to directly detect the idler photon (nor the object). Otherwise, we would just shine the idler photons at the object and measure them to infer the refractive/transmissive properties of the object. However, in order to perform this experiment, it is crucial that we are able to produce the idler photons in a precisely controlled manner. Considered in the abstract, the asymmetry in our abilities that is necessary for this technique to be useful is certainly not totally unreasonable, but it does suggest that the technique will have a restricted range of applications. I can imagine there are two sorts of general situations where this technique could be useful: (1) the idler-like system is very weakly coupled to normal matter, such that emitting and detecting an idler is infeasibly rare, and (2) the creation and detection of the idler-like system is asymmetric for thermodynamic reasons. I think that a common example of this would be very long-wavelength photons (e.g. microwave wavelength), where generating them is relatively easy but detecting them is still elusive.After some brief searching I found this example of the detection of short-wavelength microwaves (on the border with infrared), and this recent theoretical work for plans beyond that.e   (My naive explanation is that amplifying a single photon into a macroscopic signal is difficult thermodynamically, while producing the photon is easier.)

Given that the object and idler photon have to be carefully coupled to the signal photon, this technique is substantially different than dark matter detection which is made possible merely by the creation of a coherent superposition. (Simply sending a signal photon down an interferometer would obviously not render it sensitive to the object

without the nonlinear crystals.) Nevertheless, there are significant similarities, and it’s given me something to think about for detecting dark matter in the form of a coherent field.

I have been erroneously operating under the impression that if dark matter behaves like a classical field (which, as I understand things, it will if it is a low-mass boson like the axion), then decoherence detection isn’t useful. The reasoning was that entanglement is always second order in the Hamiltonian coupling the dark matter to normal matter, and the axion-photon coupling is so weak that second-order processes are hopelessly suppressed. However, if an intermediary system (played by the ider photon above) becomes entangled with the probe system (signal photon) conditional on the presence of the dark system (the object

), then this would be first-order in the coupling and the technique might still be viable. Stay tuned…

[Thanks to John Smolin and Henrique Gomes for introducing me to this paper, and for conversation that helped clarify my thinking on the relationship between this experiment and decoherence detection.]