[Follow-up post: In what sense is the Wigner function a quasiprobability distribution?]

I’ve never liked how people introduce the Wigner function (aka the Wigner quasi-probability distribution). Usually, they just write down a definition like

and say that it’s the “closest phase-space representation” of a quantum state. One immediately wonders: What’s with the weird factor of

, and what the heck is

? Usually, the only justification given for the probability interpretation is that integrating over one of the variables recovers the probability distribution for the other (if it were measured):

is just the density matrix in the momentum basis. But of course, that doesn’t really tell us why we should think of

, as having anything to do with the (rough) value of

conditional on a (rough) value of

Well now I have a much better idea of what the Wigner function actually is and how to interpret it. We start by writing it down in sane variables (and suppress

which appears in the integrand. This is just the (position-space) density matrix in rotated coordinates

. There is a strong sense in which the off-diagonal terms of the density matrix represent the quantum coherence of the state between different positions, so

indexes how far this coherence extends; large values of

indicate large spatial coherence. On the other hand, 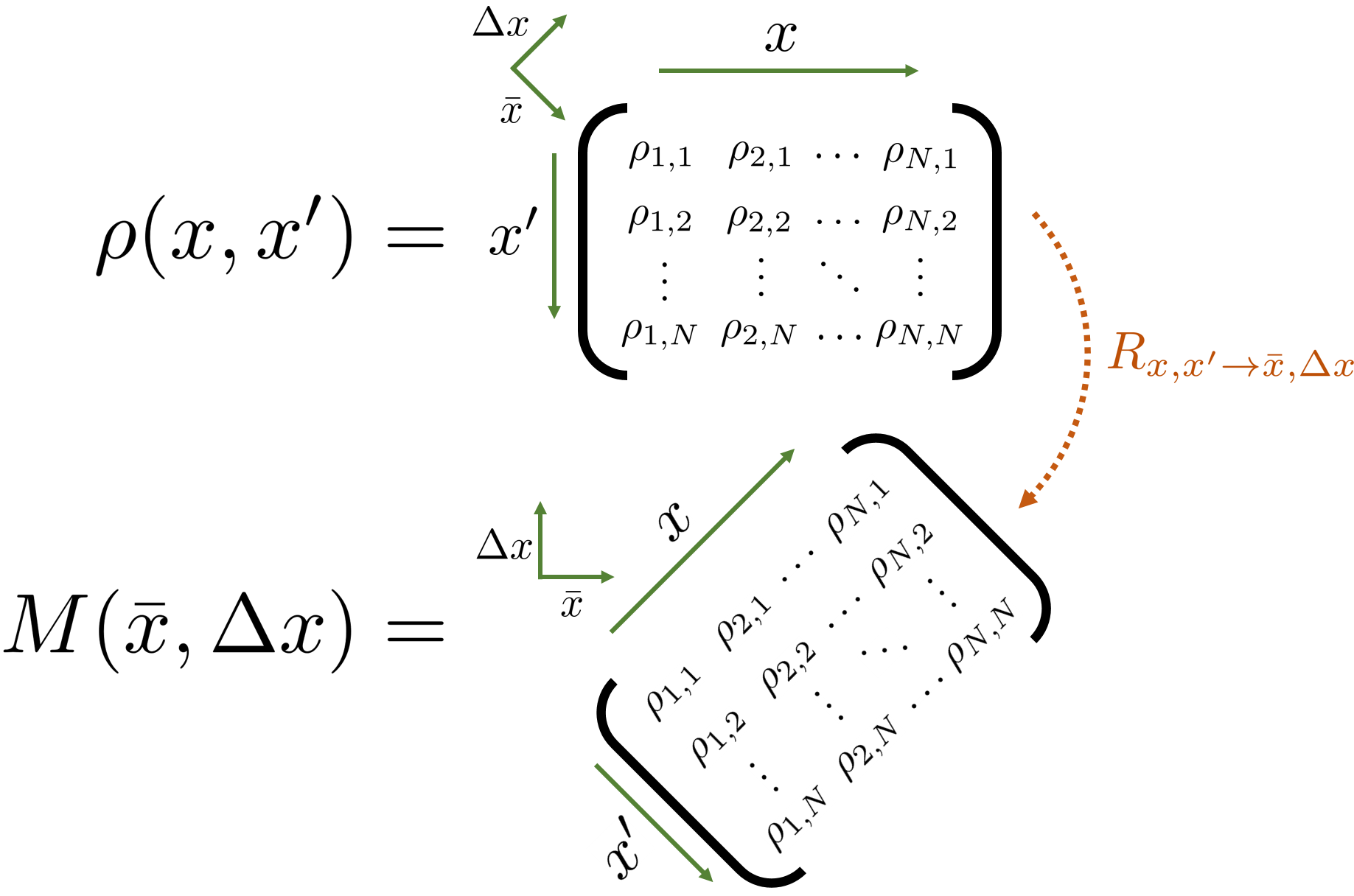 is just the position-space density matrix

moves down the diagonal, and

So then we see that the Wigner function

is just the Fourier transform of

with respect to the coherence variable

We can express this more compactly as

denotes the Fourier transform from

. This interpretation has several of advantages.

First, all the numerical constants in the formula for the Wigner function can be immediately traced back to the Fourier transform. (Different Fourier transform conventions will of course have different constants.)

Second, transforming the density matrix into a Wigner function is a manifestly reversible operation, since both the Fourier transform and the rotation are reversible.Remember that, aside from being a complex-valued function on

must also be positive. I haven’t bothered to figure out how that requirement translate into restrictions on the Wigner function beyond the simple fact that it’s a real-valued function on

is equivalent to the requirement that integrating

Third, we can also see how the Wigner function is related to the momentum-space representation of the density matrix by “filling in” all the possible applications of Fourier transforms and coordinate rotations. (See the next figure.) This lets us immediately and transparently derive that

is the relevant coordinate rotation of

Diagram of how the position- and momentum-space representations of the density matrix are related to the Wigner function by Fourier transforms and coordinate rotations. Auxillary functions

have been introduced to fill in possibilities. Each function can be transformed into any other.

is just a condensed notation for phase space coordinates and

is the (unsqueezed) coherent state centered at

. It’s well known that the Husimi Q function is just the Wigner function convolved with a Gaussian:

. (Up to normalization, the Wigner representation of the coherent state at

But of course, by the convolution theorem, a convolution in real space is just multiplication in Fourier space:

has more meaning than you might think. Structure of the Wigner function inside areas smaller than

are known to be associated with the type of long-scale coherence that is typically destroyed by environmental decoherence.Furthermore, this structure is responsible for superpositions being useful in quantum enhanced measurements.c   But the Fourier transformed Wigner function inverts this; the sub-Planckian structure now is on large scales, while the supra-Planckian structures (which gives the classical phase space probability distribution) is compressed to small scales. When calculating the Husimi Q function, we see that the Gaussian just suppresses the large-scale structure (i.e. the coherence) while leaving the small-scale structure untouched. (Of course, we could probably have read this off directly from the convolution.)