This post will summarize the various consistency conditions that can be found discussed in the consistent histories literature. Most of the conditions have gone by different names under different authors (and sometimes even under the same author), so I’ll try to give all the aliases I know; just hover over the footnote markers.

There is an overarching schism in the choice of terminology in the literature between the terms “consistent” and “decoherent”. Most authors, including Gell-Mann and Hartle, now use the term “decoherent” very loosely and no longer employ “consistent” as an official label for any particular condition (or for the formalism as a whole). Zurek and I believe this is a significant loss in terminology, and we are stubbornly resisting it. In our recent arXiv offering, our rant was thus:

…we emphasize that decoherence is a dynamical physical process predicated on a distinction between system and environment, whereas consistency is a static property of a set of histories, a Hamiltonian, and an initial state. For a given decohering quantum system, there is generally a preferred basis of pointer states [1, 8]. In contrast, the mere requirement of consistency does not distinguish a preferred set of histories which describe classical behavior from any of the many sets with no physical interpretation.

(See also the first footnote on page 3347 of “Classical Equations for Quantum Systems”Gell-Mann and Hartlea   which agrees with the importance of this conceptual distinction.) Since Gell-Mann and Hartle did many of the investigations of consistency conditions, some conditions have only appeared in the literature using their terminology (like “medium-strong decoherence”). Nevertheless, I will exploit my home-blog advantage by putting my preferred terminology in italics and all alternate terminology in the footnotes. I eagerly tilt at windmills.

This post is largely based on papers by Halliwell, Gell-Mann and Hartle, and us where many of the various consistency conditions are reviewed.

An orthogonal Heisenberg-picture projectors is

, and a set of mutually-exclusive and exhaustive such projectors is

is constructed by selecting a single projector at each time, where

is the alternative at times

. The set of all fine-grained histories forms the sample space

is a subset of

, and it corresponds to a class operator

, where the class operator of a fine-grained history is

A history is said to be homogeneousSimilarly, Isham has divided various attempts at set selection principles into ones that are mathematical (i.e. maximizing some function) and physical. However, the physical principle he considers is too vague to be useful, and if taken literally (rather than as a guiding principle) would produce far too many histories for them to remain consistent for realistic times scales.b   (or is said to have the “chain form”) if its class operator can be written as a chain of projectors at the different times; this obviously includes all the fine-grained histories, but it also includes coarse-grained histories where each time step is coarse-grained independent of the other time steps. Histories that cannot be written in this way are called inhomogeneous.

There is a coarse-graining partial order on the space of all possible coarse-grained histories, denoted by

, when the fine-grained histories composing one are contained within the other:

The state is given by

. The decoherence functional is

. The (unnormalized) conditional states are

. For a given tensor factorization

of the Hilbert space, the partial-trace decoherence functional with respect to

are said to be recordsGell-Mann and Hartle call these “generalized records” to emphasize that they need not be feasibly accessible to any observer. Indeed, they will contrast with our concept of “redundant records”, which will be much closer to the intuitive idea of a record.c   of the histories

In the special case that the state is pure,

, we give the name branches (or “branch state vectors”Gell-Mann and Hartled  ) to the conditional pure states

The conditions are listed below in roughly increasing order of strengthThe order the conditions form under the relation of logical implication is not total, i.e. they can’t all be neatly ordered from weakest to strongest because some are not comparable.e  . The first four of them are generally considered too weak to be physically reasonable, now being merely of historical and conceptual interest for understanding the formalism. Indeed, Diosi has pointed out that histories required to only satisfy one of these weaker conditions always yields a mapping from quantum states to outcome probabilities that is unacceptably sensitive to purely formal adjustments (such as appending non-interacting ancilla systems). In contrast, bonafide probabilitiesIn the words of Diosi, “von Neumann probabilities”.f   can be assigned to sets of histories satisfying one of the later conditions. The key condition delineating this distinction is that of consistency. All the later conditions are strictly stronger than consistency, and so inherit its robustness.

and, under those conditions, are necessarily real, positive, and sum to unity.

All conditions stronger than consistency are motivated at least partially to resolve the so-called set-selection problem. In other words, the later conditions are built on the foundation of bonafide probabilities (and, hence, consistency), and seek to pare down the enormous space of possible sets of histories in search of ones we could actually identify with the external classical reality we perceive. Such conditions can be separated into two major categories: those based on abstract logic, and those motivated by physical principles.Similarly, Anastopoulos has suggested a split between precise mathematical postulates and physically inspired ones.g   Most of the conditions of the later type require a preferred tensor factorization of the Hilbert space, namely the system-environment decomposition featured in the decoherence program or the decomposition into many subsystems featured in the quantum Darwinism program.

is assumed to be fixed. The histories

are assumed to range over a set of histories

that is exclusive and exhaustive, i.e.

forms a partition of

For completeness, we also include these two other conditions which are rarely used or discussed.

The condition of homogeneous-specific weak consistency only made sense in the early days of the consistent histories program, when attention was generally restricted to homogenous histories.

The condition of medium strong decoherence made only one brief appearance in a paper by Gell-Mann and Hartle. It is unappealing because (1) it is probably not robust under a more complicated purification of

and (2) it becomes ungainly upon degeneracy. 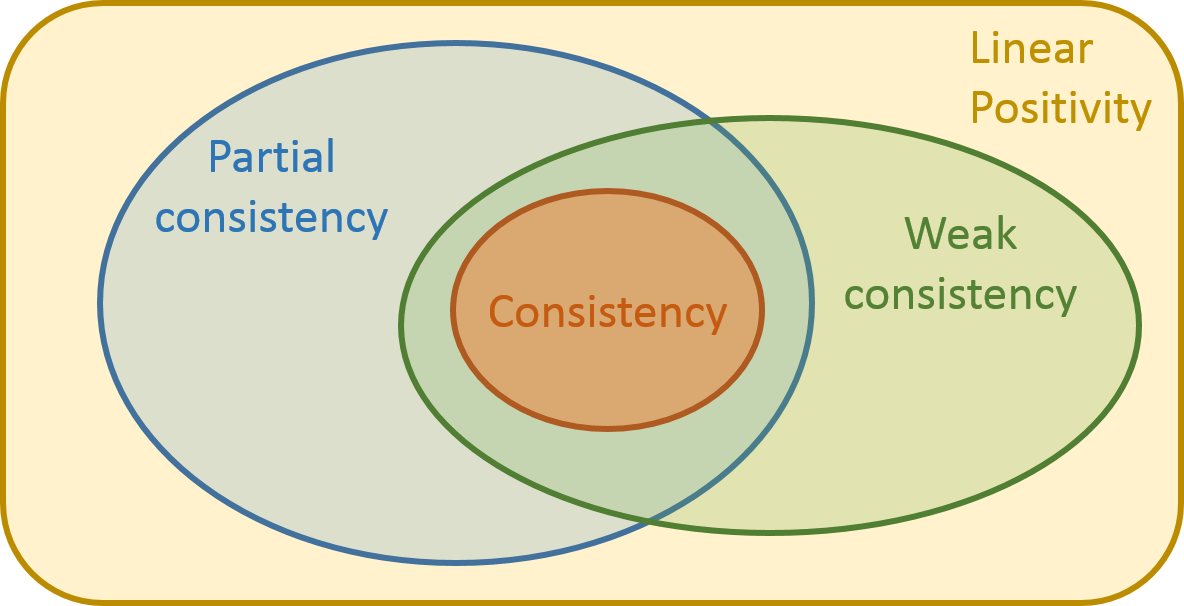 Venn diagram showing the relationship between those consistency conditions with important implication for probability robustness. Only “consistency” (aka “medium decoherence”) is considered sufficient to guarantee sensible assignment. This image is just a colorized knock-off of one by Halliwell.

The homogeneous-specific weak consistency is only of historical interest, having been superseded by weak consistency which dispenses with the restriction to homogeneous class operators. See footnote 4 on page 3353 of “Classical Equations for Quantum Systems”Gell-Mann and Hartlet   for more info.

The condition of partial consistency was first discussed by Diosi in an arXiv paper that was never fully published. Most of the content in that paper eventually made its way to the PRL version over a decade later, but the discussion of this condition did not appear there. It was first discussed in print, and named “partial decoherence”, by Halliwell.I am unsure if partial consistency has been rule out quite as conclusively as linear positivity and weak consistency were by Diosi (it being the condition identified by Diosi in an attempt to rescue linear positivity). However, I know of no reason to think that it is at all attractive.u

Records always imply consistency and, when the state is pure (

), they are equivalent. Likewise is true for records in

One may also consider weakened forms of redundant recording and redundant consistency, where the respective equation holds only for

ranging over some large subset of the

subsystems. For instance, it might be interesting to look at a thermodynamic limit where histories are redundantly recorded in “most” subsystems as

[Future tasks: (1) better understand Gell-Mann and Hartle’s two-part “strong decoherence”, and connect this to the importance of homogeneity (chains), (2) discuss the dependence of preclusive and ordered consistency to the choice of the sample space

, (3) add feasibility, (4) say whether homogeneous-specific weak consistency applies only to sets which contain only homogeneous histories, and (5) discuss the relationship between Finkelstein, records, and strong decoherence as appears in “Classical equations for quantum system” Gell-Mann and Hartle.v  . ]